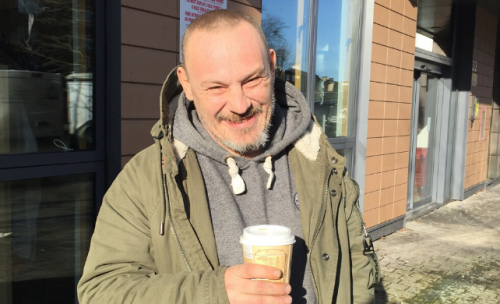 Prison and then homelessness have swallowed a third of his life but he’s come out the other side. At 50, he’s putting it all behind him. He’s calm now, happy even.

It all started with a disagreement.

“My son got kicked out of our local shop and the security guard was a bit rough with him, so I went round and had words. I asked him not to do it like that again, do it a different way,” says Wayne.

“I thought we’d leave it at that.”

A couple of nights later he was back at that same shop where a crowd had surrounded his son and were shouting at him.

“I had this mad thought that if I got the wheel base from the back of the car and ran screaming at them they’d all run off. And they did. Except the security guard. And I lost my temper with him, I hit him once and he fell to his knees.”

The security guard needed four stitches, says Wayne. The life sentence was the culmination of years of volatile behaviour. The police wanted him off the streets.

“Growing up we were quite a poor family, it was hard really. There were no carpets on the floors. But my mum was proud, she tried her best. She was a single mum. We never had much money or much food or much of anything really.”

When he was 11, Wayne began jumping into people’s gardens and pilfering things he could sell. “Then I’d start stealing out of their sheds, their houses, out of shops. As I got older my drinking got worse and I started getting into fights.”

Having a son felt like his salvation. “It was a brilliant relationship, we had 13 years together. We’d talk about everything. If he did something wrong I’d explain things to him.

“I never had a dad when I was younger so I wanted to be the best I could for my boy.”

Wayne went to prison at 33. “It was hard, really hard. I didn’t know you could get a life sentence just for hitting someone, know what I mean?”

He split up with his wife, but she brought his son to see him every ten weeks.

As for the rest of his family, his mum died two years before his release but he was able to get out for the funeral.

“It was a bit surreal really. It felt a bit wrong, you know? They hadn’t come to visit, hadn’t written a letter, hadn’t sent me a birthday card in eleven years. And they were all carrying on like I’d just come back from the shop or something.

“All I wanted to know was – why did you leave me in there? I haven’t done nothing to you.”

Then his worst nightmare came true. “I thought the worst thing that could happen is when I got out my son would be inside.

“He got into an altercation with a load of travellers and stabbed one of them. But then they realised all this time he’d been ill – paranoid schizophrenic – so he got sectioned.

“The traveller had two major organs taken out – gall bladder and something else.”

After 13 and a half years inside, Wayne’s release date was coming up.

“I was nervous coming out because I had nothing to come out to – no family, nothing.

“Silly things got to me – like crossing the road, everything seemed to be going ten times faster.”

Wayne went to the probation hostel – a temporary home in the community for ex-offenders who have nowhere to go.

“I was told if you go into a probation hostel you’ll be guaranteed a council property at the end of it.

When the 12 weeks were up, Wayne says he was on his own.

“It’s worrying that of all the prisoners released in the three years to 2018 half had nowhere to go or were let out to ‘unsettled’ accommodation,” says Debra Ives, Director of Operations at homelessness charity Evolve Housing + Support. “Of those, two thirds are likely to reoffend.”

“I started sleeping under a shelter in Norbury Park,” says Wayne. “I never thought anyone could sink so low.”

At first he didn’t even have a sleeping bag. “People show you where to go to the toilet and things like that. But I didn’t have friends on the streets. If you’ve got something, people want to know you. If you’ve got nothing, nobody wants to know.”

Wayne slept rough for nine months in the biting wind of the park, only a small open roof above him. Then he was referred to a temporary shelter and from there to Evolve’s supported accommodation.

“Staff were keen to ask how I was doing and all that, but it was hard at first to ask for help,” he says.

“When I read his paperwork I was nervous to have him in the building,” says Gerard Kona, team leader at Evolve’s supported housing service, Alexandra House.

“But of all the people who come through here, he stands out as a real success. No one wanted to have him – they’d all written him off. But he proved them wrong.”

There is a issue in Evolve’s homelessness services with hoarding – former rough sleepers now have a place to call home and then they start collecting more to make it their own.

“When he first lived here he had so many belongings to the point where no one could get in his room and we were concerned,” says Kona.

“Then, in just six months, he turned his room around and threw away all the things he’d been attached to. He won Alexandra House’s award for Best Kept Room. Then he started cleaning other people’s rooms.

“Wayne had such a positive impact on the others.”

Wayne has now moved into independent accommodation. “But he still comes back once a week to say thank you to staff. He’s so well mannered!” says Kona.

Wayne’s biding his time, waiting for his son’s release from a psychiatric hospital in the next few months.

“I want to spend time with him as an adult. We’re both fully grown men now aren’t we?” He says.

Nudging retirement age and with a life sentence behind him, Wayne doesn’t think he’ll be able to get a job now.

But he’s a different man. The camaraderie at the Evolve shelter has softened him. He says there’s no chance he’d reoffend.

His needs are simple – he just wants a place to call home and time with his son.

He’s got a message for other rough sleepers. “Don’t give up hope. Try to find the best agencies like Evolve and Crisis. Sooner or later someone will take notice of you and help.

“Things will get better.”