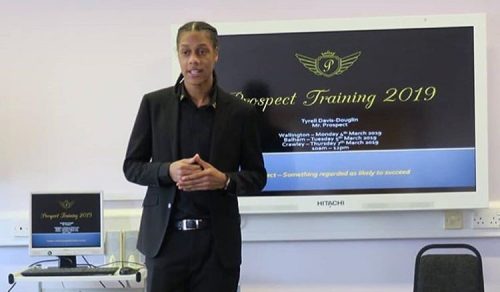 Everyday Tyrell gazes out of his window and up at the Alto apartments that stand out looking over London.

“That’s the apartment block I want to retire in. It’s an empowering thing to wake up and see that building every day. That’s where I want to be. Before I even came to Evolve that was my ambition.”

Growing up in Croydon, South Norwood, Tyrell faced challenges much earlier than most. He experienced regular racial profiling, received no support or guidance to help him choose a suitable career path, and the majority of his peers were engaged in anti-social behaviour. Tyrell’s future was uncertain.

“Early on in life I didn’t get off to the best start. I was what many would refer to as a product of my environment. It was a deprived community in the respect that real pathways to real success weren’t being presented to us.

“At a really young age I often had run-ins with the police. Not because I provoked them or anything, but just because I look stereotypically like an offender.

“That’s why at about 15 years old I took it upon myself to study a little law and learn more about my rights, so that I couldn’t be taken advantage of. I began to realise that when you have knowledge that other people don’t have, you become valuable to them.”

Tyrell was referred into Evolve’s young person’s service early in 2020. Having always lived in Croydon, he move out of his parents’ home for personal reasons. He has recounted time and time again how lucky he felt to find supported accommodation in Croydon; an area where he has friends, relationships and strong community ties.

Throughout his time in school, Tyrell saw countless friends falling off the radar and decided to do something about it. He officially launched his business in sixth form and started to work with young people to bridge the gap between education and employment. Tyrell went out in search of career pathways and instead of taking an opportunity for himself, he chose to dedicate his time and business to opening opportunities to others.

“One of my first clients at the beginning was the Conway construction company. When I contacted them, they happened to have just released 100 paid apprenticeships that I was able to share with my peers at the time.

“It was exactly these opportunities that weren’t available to me or my friends at Harris Academy. There was no support.’”

“I realised that it wasn’t that there were opportunities out there. It was just that they weren’t being effectively communicated to me and my peers. That is why I set up my company, Prospect FTF.”

As Tyrell was about to leave school, he contemplated his options. He had only known a small number of people who went to university. Most of them, had nothing good to say and continued to struggle finding a sustainable career.

“I was told when I was leaving school, I only had two options. Go to university or get an apprenticeship. But no one was there to support me to find either of these and couldn’t afford to make the wrong decision. I refused to accept that there were only two paths available for my whole future.

“The reality was, there was no guarantee of getting a career or job as soon as you leave university. That was the biggest disincentive. You were told that the biggest incentive to university was if you go you were more guaranteed a position of employment when you leave. But that’s no longer the case.

“You end up leaving university and still working in retail to make ends meet and falling more and more into debt because the right opportunities haven’t come about. I couldn’t afford to take that risk and end up saddled with loans and debt. I didn’t want to take on something I wasn’t sure I could repay if people I knew couldn’t get jobs after leaving higher education.”

Armed with his trademark determination and passion, Tyrell decided to pursue his business enterprise and sought to engage with every sector he could find in the process of building his network and contact list.

“I was modelling, creating short films, forming relationships with Croydon Council, speaking at economic summits and schools. I was doing so much stuff because I realised if I wanted to bring back opportunities for my students from every different sector used to make up an economy, I needed to be involved in those opportunities.”

Tyrell created ProspectFTF to provide opportunities for young people to showcase their businesses, talents and capabilities, with the added goal to develop relationships with every corporate business in London, so that young individuals with high ambitions have every chance to succeed. But when the pandemic took hold of the country and the UK entered lockdown, new challenges arose.

Like so many other companies, adaptions had to be made. Tyrell revised and amended his course to fit with life during lockdown. He initially developed the ProspectFTF Training Course to be taught in person to develop and educate students on how to become ’employable’, so that they could better utilise the opportunities they were being presented with. Since lockdown, Tyrell took his course and empowerment service, which remains at the heart of his company, online.

“I was quick to adapt my company to dealing with the impact of Covid-19. I am lucky that my presentation is on a USB stick and I can take that to any socially distanced environment. The biggest issue was figuring out how to find new young adults to pair with my clients. The course itself I can take online, but meeting people that I can eventually introduce to clients requires you to be face-to-face in their environment.

“I realised I needed an outdoor space. That’s why I bought an outdoor marquee that could be set up anywhere. This way I can still meet with students, have that face-to-face and get their contact details to develop that relationship further down the line. It’s great!”

Tyrell’s creativity and determination mark his distinctive approach to problem solving.  Since leaving school and moving to Evolve, Tyrell’s business has continued to go from strength to strength. The impact of the pandemic has meant things have slowed down, but Tyrell continues to adapt and adjust.

One of the biggest impacts that Tyrell can recount during the first few months of moving to Evolve has been the relationships he has built with staff and residents. In particular, his relationship with Evolve Team Manager Phil who has encouraged and welcomed Tyrell to staff meetings to share his perspective. In the short number of months that he has been living in an Evolve service, Tyrell has become a practical person to talk to. Someone with profound wisdom for his age who has great ideas to help improve day to day life for other young homeless people in our accommodation.

“I knew things were definitely going to get better when I moved to Evolve. I finally had my own space to channel my own positive energy. Evolve has been very supportive. It’s been really great to see the respect that they have for me and my work. I have even been invited to staff meetings where I can share my thoughts on how to better engage the young people at the service.

“Staying at Evolve has given me a real sense of independent living, whilst still having support from staff who care about your wellbeing. It’s a great transitional service.”

Tyrell still has his eye on the Alto apartments and he believes with every inch of his being that he can see his future self, standing in the window of the penthouse apartment. For others determined to achieve their own ambitions, Tyrell has a formula he wishes to share.

“There are two equations that will get you through life.

“Quality of life over money, and personal relationships over qualifications.

“Everybody is different and I think people need to understand that better so they have a better opportunity to succeed.”

Tyrell now works alongside the Mayor of London and the Greater London Authority, as part of their Violence Reduction Unit. He hopes others will see his rise to Youth Consultant as an example of how a good idea paired with hard work, determination, consistency and faith can enable anyone to find their success.