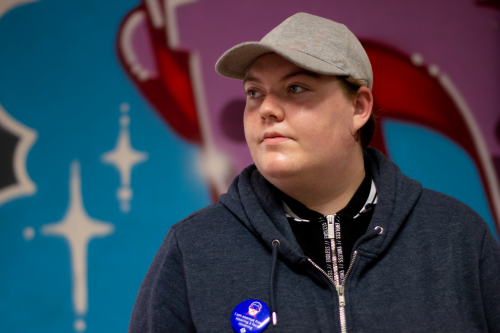 Up until her sixth birthday, Shannon and her brother had lived in the care system. She settled in West Norwood after her adoptive parents, having originally planned on adopting one child, took in both siblings. But growing up for six years uncertain, unstable, and confused had eroded Shannon’s mental health and sense of self-worth.

When Shannon was older, she was diagnosed with anxiety, depression, and anger issues because of her time in foster care, but as a child she didn’t understand why she felt this way. Despite all of this, Shannon’s relationship with her brother gave rise to her desire to put the needs of vulnerable people before her own. As a child, she refused to let anyone near her brother. She’d take him to the bathroom, tie his shoelaces, and hold his hand when he was upset. They were inseparable when they were in care.

“My mental health was never really diagnosed ‘till I was an adult. They knew I had issues, but they never actually said what they thought they were.

“Growing up in foster care before the age of six can be traumatizing.

“I always felt like such a bad kid for having all these anger issues, and then I looked back when I was much older and thought, ‘no wonder I had anger issues! I realised I didn’t know how to control it at that age and that I couldn’t judge myself for that.”

Like other teenagers around her age, Shannon frequently fought with her adoptive parents, but it wasn’t until they separated that things changed for the worse. At the time, Shannon worked for a learning disability and mental health charity. The stresses of home life began to compound with her work life, as she began to put the needs of others before her own again.

Shannon had always been a hard worker with a desire to help those that were vulnerable, but her good nature was taken advantage of. Her usual eight-hour shifts often turned to 10- or 12-hour shifts. She’d find herself walking home from work at 2am, exhausted and drained. She was the first one to say ‘yes’ to extra work, because she always wanted to help, but she suffered for it. Shannon ended up fainting on shift on more than one occasion and ultimately burnt out from the pressures at home and at work.

“Me and my mum didn’t really get along. I wasn’t able to keep a job because of my mental health and it was impacting my personality at home. It was never a pain for me to get a job, I could always get a job, which was really nice. I just couldn’t keep it up because I was either overworking and running myself completely into the ground, or I would take on the emotional responsibility of everyone else around me.

“It was around this time that I left home. They never actually kicked me out, they just gave me a timeframe to leave and find my own place. They even let me have another month when I was struggling to find somewhere.”

Shannon decided to sofa surf at her friend’s family home while she continued to look for a place, but that time was brief. Her friend had her own family issues and Shannon felt too uncomfortable to stay. Shannon became street homeless after failing to find housing through the council. She lacked a passport, provisional driver’s licence, or the appropriate documents to support her application for housing, but she didn’t give up. She remembers this period vividly and considers herself lucky despite her lived experiences.

“Thankfully I didn’t meet the wrong people. I met the nice people! Funnily enough, two of them I had known for years because every time I went to my local Sainsbury’s I bought them something and they just remembered who I was. I remember them saying, ‘you can’t be the one that’s here now!’ They told me about all the places I could go to wash, eat or take shelter.’

“Whenever I go to that Sainsbury’s I still buy them food to this day.”

During this difficult time, Shannon attributed her survival to finding safe places to sleep. She fell into a regular routine of sleeping during the day and staying awake during the night. There were times she took long trips on buses to find some peace in the chaos.

“There was one time I fell asleep on the 91 bus and the driver had noticed that I’d been on it for three trips. He actually bought me a sandwich and left it next to me. He didn’t tell me to get off, or that I hadn’t paid. He just let me sleep. I remember it being the first proper sleep I’d had in ages.”

“That act of kindness meant everything at the time.

“I was so worried about falling asleep and something happening. It gave me hope that there was still kindness I could hold onto in humanity.”

After two months of being street homeless, Shannon finally hit a breakthrough with Lambeth council. Her case was pushed forward after Shannon’s stepmother finally agreed to come in to verify Shannon’s identity. After a few more weeks of moving between crash pads, churches and emergency housing offered by the council, she was referred to Evolve Housing + Support.

At first, Shannon was quiet and kept her distance from others, preferring to stay in her room. It took time and for a while she continued her routine of staying awake at night and sleeping in the day, but after a few more months Shannon began to engage with staff and counsellors.

In 2018, Evolve Housing + Support found a strong link between trauma, mental health and homelessness in its ‘Hurt to Homelessness’ report. Research revealed that 80% of homeless people have suffered a traumatic event in their childhood. The results highlighted the vital need for counselling and the pivotal impact it would have helping homeless people overcome their traumatic experiences and being able to move on.

By the time Shannon came to Evolve, the charity had launched a free, in-house counselling service for all homeless residents to help individuals break the cycle and achieve independence again. Speaking about her own experiences and her place in the world now, Shannon wanted people to know that the pathway to recovery is long but attainable.

“In the beginning I kept to myself. I didn’t talk to anyone other than the staff, and even then it was only a few staff members. It took me a while to open up to anyone, even my support worker at the time. My anxiety was really bad. I was in a brand new place with almost 100 other people and it felt really daunting after pretty much being by myself for ages.

“I actually went into hospital during my first year at Evolve. I thought I was doing well. I even managed to trick myself! I went to a play on the Southbank and my mates and I stayed out for a while. I remember we had a really nice evening, but half an hour after I got back to my room I took an overdose.

“It wasn’t planned and looking back, it’s clear I wasn’t in a good place, but I managed to convince myself I was happy because I thought I should be.”

One of the biggest turning points for Shannon came when Manny joined the charity as a handyman and impromptu music teacher. Within the first few months of working with Evolve, Manny had set up a small music club to nurture the passion some young adults held for music at the homelessness service. Shannon joined the group to explore her own voice and today she recognises it as the day she found an outlet for some of her lived trauma.

“I’m still working on myself, but I’ve come so far.

“I still do laundry at 3am because of my anxiety, but I’ve also opened myself up to so many more people and I feel so much more confident. Life has thrown a lot at me recently. Like, I know ten people alone in the last two months that have died and I’m trying to work through that with my counsellor. But the music lessons with Manny have been a huge help!

“I’ve learnt that if I want to be there for others, I need to look after myself first. Ever since I was child, I’ve tried to put others before myself, but it’s always led to me crashing. I know if I want to look after vulnerable people in the future, I need to make sure I am looking after my own mental health, so I am around to do it.”