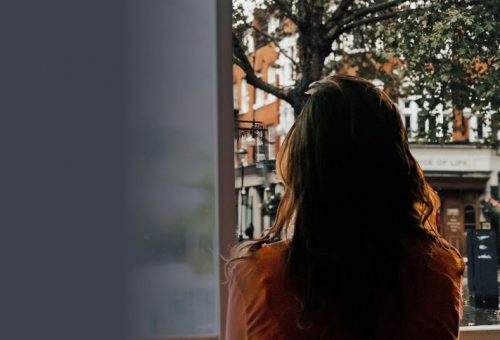 “There was pressure to stay where I was, but where I was wasn’t safe. My family felt I had chosen to be homeless, which heightened my depression and anxiety. I felt like I was doing something wrong by trying to protect myself.”

When her family moved abroad, Mia* initially went with them, before challenging circumstances forced her to move back to the UK alone. First she stayed with her partner, but when he became abusive towards her she had no choice but to leave, even though she had nowhere to go.

“It was a scary, daunting, crazy experience. It’s something I had never faced and never expected to face. I had to sofa surf for a while, before getting emergency accommodation with the council. From there I found Evolve.”

Mia stayed with Evolve for two years, in which time she got involved with a range of projects and spent time with support staff on a range of things, from mental health management to budgeting.

“There were certainly down days. I struggled with managing money and got into debt. I had severely anxious periods and sometimes wouldn’t come out of my room for days. But, my keyworkers helped me to put plans in place and live within my means. They would knock on my door and ask if I wanted to go for a walk. They also helped to book training courses and appointments. I went to cooking and art clubs too, which were really helpful for socializing and building my confidence. The support I got made me very autonomous – I was helped, but people wouldn’t do things for me, which taught me a lot.

The name is appropriate – I found myself evolving in ways I wouldn’t have expected. I had two brilliant keyworkers in that time who pushed me to where I needed to be without ever making me feel pressured or burdened. They were the fuel I needed to keep going.”

Mia now volunteers with our Peer Circles programme, which brings customers together to share experiences and skills. She also recently moved into her own place in Bromley.

“You’re not always in a position to give back to people who have given to you, but it makes my heart full knowing I can help, and support others going through what I went through. I know that the end outcome can be a positive one.

If I had left Evolve any sooner I wouldn’t have been ready, but after two years I was. I’m still in touch with my keyworkers – they were such a big part of my journey and don’t realise what their support meant.”

When asked what she has learned over the last few years, Mia has lots of answers.

“I’ve been working on respecting myself, but that takes effort everyday. I was surrounded by people who didn’t respect me, and I acted the same way. If lack of respect is normal from a young age you don’t notice it. When I experienced domestic abuse it was kind of normal, because I thought I deserved to be treated like that, but now? No way. Now I know its ok to not be ok, and to say no.”

Like everyone S. was impacted by the pandemic, but it hasn’t stopped her from moving on with her life.

“It was tough moving into a flat and learning to live alone, but I survived and even had a Christmas by myself, as other family members were high-risk. Without Evolve, I wouldn’t have been able to do that, and might have slipped into anxiety or depression. Managing emotions is something Evolve has taught me – things don’t phase me like they did.

This year has been great so far. I’m very independent and autonomous, I manage my bills, I’m now driving which is a massive thing, and I’m volunteering. I’m on an advice and guidance course which I found through St Giles and Evolve, and once that’s done I’ll be ready to work in support work.

Getting the support I needed made such a difference, but so did just feeling like someone actually cares, and will do what they can to help you out. If I could do that for someone that would be great.”

*The names in this story have been changed to ensure confidentiality.