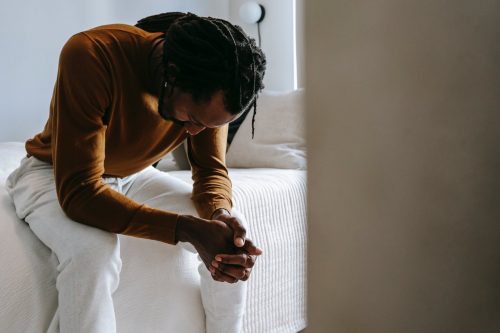 For most people, home is a place that’s safe, stable, and secure. But what happens when those things aren’t assured? Growing up Mark never felt the safety most children typically get. He experienced trauma and abuse at home, but only left when he was asked to move out a few years ago.

“I was asked to leave, but I didn’t go straight away. I had always thought I’d be more settled when I moved out, so I didn’t have savings or anything. It took me about a year to figure out how to do it.

“I met a friend at a support group, and she had a flat, so I was stayed with her for a month. At the time, I had a mentor who had connections with the DWP and when I told them about my situation, they contacted someone from the Crisis Skylight Centre, and they advised me to go to Crisis in Croydon.”

“It was difficult, most nights I was crying a lot.  It was a shock because I never thought I’d go through that experience of being homeless. I was sleeping on mattresses on the floor, and some of the churches were quite cold. Really cold. I was freezing. I was lucky I had my mentor to encourage me and remind me about the bigger picture that I was finally able to feel safe”

Mark moved into Evolve’s supported housing shortly after his appointment with the council. Since joining, he has taken part in cooking and fitness classes and has developed a close relationship with his former key worker who introduced him to running and new foods.

“Being at Evolve definitely helped to give me more confidence. Everyone there is really encouraging and supportive and offered to help, which is good because I don’t really like asking for help. They’re attentive: they helped me with getting into work, and always asked if I was okay, which was nice.

“I’ve always wanted to do something with my life. When I went to university, I planned to do a masters after. But since graduating I’ve been doing different jobs here and there. I was doing administration for a while, I also volunteered at a charity shop and with a homelessness charity.

“It gave me insight into working with people again. When I was volunteering with the homelessness charity, I realised that whilst I didn’t enjoy working in the sector, I did enjoy volunteering within it. After that, I started to explore other kinds of roles.”

Mark moved on from Evolve in November and is ready for the next chapter of his life, having already completed a degree, as well as several online short courses. He has since started a new role that he is very excited about.

Thinking back to his time at Evolve and his experiences using its free counselling service, Mark said “I learned more about boundaries. It was really helpful to be able to talk to someone who had an objective view, who didn’t have the same cultural views as me.

“My counsellor didn’t say I had to respect my family or be close to my family no matter what they’ve done. That has helped me to have better boundaries and to keep myself safe in every way. Physically, mentally and emotionally.”

When he was asked about what he has to say about others going through something similar at home, he said: “Speak up, have good friends around you who encourage you to look past the current situation you’re in, because that helped me a lot. I had a friend. They really helped me out and encouraged me, kept pushing me along and reminding me that it wouldn’t last forever. Having good people around you helps a lot. To give you that push to keep going.”

If you are homeless or worried about becoming homeless, find out how to get help here

Photo by Alex Green from Pexels