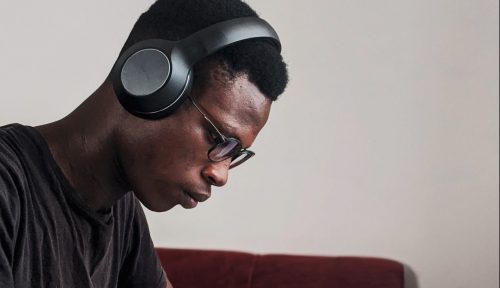 2020 was undoubtedly challenging for many people living in London, but for Gabe it’s been more than that. It’s been a test of character, confidence and strength which led Gabe to leaving his abusive family home during lockdown, after it all became too much.

“It always felt toxic, but it got to a point where it felt unbearable for me. I just really didn’t want to be there. Every day I would get a comment like, ‘I don’t love you’, or ‘what’s the point of you being alive?’ Whether I was in my room or coming down to get food, they would just attack me for the sake of attacking me.”

Just a few months into the pandemic, Gabe was forced to move into his friend’s house after years of neglect and frequent instances of mental and physical abuse. After a short period of sofa surfing, he was allocated a social worker and came to find supported housing at Evolve.

“I basically told them my life story. They said that my parents had been serially neglecting me. I knew my relationship with them wasn’t what other people experienced, but I never understood it as neglect.”

When Gabe was a child, his father would often come home drunk, retreating to the kitchen to make himself food. As a child, Gabe vividly remembers waking up late at night to the smell of something burning. Each time he’d go into the kitchen to investigate he found either the cooker or water was left on. Unlike other kids his age, Gabe was left to look after the people who were meant to be looking after him. Since that first conversation with a support worker, Gabe has grown dramatically as a person. Whilst living at Evolve, he has opened up about his experiences and has even come to terms with forgiving his father’s behavior.

“I discovered the strength to forgive my dad a little bit by looking at the way he acted with my little brother. It was different to how he acted with me. With me, I would be told to ‘get up, we’re going out’, and I’d spend my whole day in the car from 12pm to 1am, while he drove around and did his own thing. That was my childhood.”

“But when it came to my younger brother, I saw him take him to football games and stuff like that. It made me annoyed at first, but it also made me happy to see the change. My little brother never understood what me and my sister went through when we spoke of our childhoods, because he was so young.”

A month into 2021 and a few months after he left his family home, Gabe learnt that his father had died from Covid-19. Despite years of neglect, Gabe went to the funeral to mourn his father’s passing. But, when he arrived his family acted like they didn’t know him, only to further remind him that he had made the right decision to leave. Gabe admits that the initial decision was overwhelming, daunting and terrifying, but thanks to close friends he was able to move out and start his journey of recovery.

“If it wasn’t for my gut instinct telling me ‘you should leave now’, it could have been very different”, Gabe said. “I think there was a reason I had left at that specific time. I knew it was time for me to speak my truth. My friend helped me discover that I needed to start being my own person.”

“At the beginning of lockdown, I thought it was hard but I also thought nothing of it. Every single day I would always make sure that I was out of the house. It wasn’t safe for me to be there and I think leaving each day was a way to protect myself physically and mentally. But I knew I couldn’t keep doing that forever.”

“A few months into the pandemic I came back home after a late-night walk and my mum started shouting ‘you’re useless!’, ‘you don’t do anything around the house!’, ‘what is the point in you being alive?’, ‘I wish I never had you!’ It really made me questions why I should stay here any longer. So, I just packed up my bags and left.”

“In the past, when I’ve thought about leaving, I always doubted whether it was the right decision. I’d think to myself, maybe you’re just being overdramatic. Just relax for a second. Lay down for a minute. But this time around it felt different. The next morning, I woke up and I still wanted to leave. I felt I had to because it was the right thing to do. When I did leave, it was scary. You’re saying goodbye to people you’ve known for your whole life, but at the same time I felt relieved, because at least I can start to feel a little bit happier than I was.”

“I think the pandemic definitely bought clarity and perspective. It made me realise I needed to leave and the moment I left, it was just like, cool, well now you know you’re going to be in-between houses for a little while, it’s time to get your own job. That’s when I started asking myself what I wanted to do.”

Without the daily distraction of home life and the constant sense of anxiety, Gabe was finally able to focus on his future and what he wanted from life. He stopped surviving and started living for himself. Now, Gabe has an ambition to become a pharmacist and is researching how to make that dream a reality.

Speaking about his life now and what hopes he has for the future, Gabe said, “I feel so much safer here, it’s nice to know that when you leave and come back there’s someone there who says’ Hi Gabe, how are you? How was your day?’”

“Even small things like that make the biggest impact. I grew up with parents who couldn’t care less about how my day was. This is all I could ever ask for really. I don’t really expect sympathy, I’m just telling my life story how it happened. I know we all go through stuff but, this is my story. Maybe it’s worse than yours, maybe it’s not, I don’t know. But I am glad I ended up where I did.”