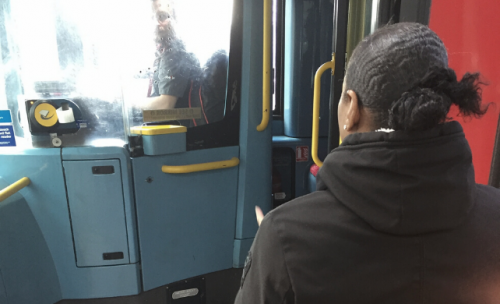 Donna’s eager to get her laptop working, she’s been doing e-learning courses to retrain as a sign language therapist. “I just need to get these brain cells working,” she says. Sitting in an office in her supported housing in Croydon, it’s clear she’s brimming with determination to get back to work.

Things started to go wrong for Donna in 2014 when her landlord asked for his flat back. She and her husband had lived there for three years, and always paid their rent on time. When they went to the council they found out their landlord had been illegally subletting his social housing, making them unofficial tenants and precluding them from help.

If someone had told her a year earlier she’d end up homeless, she says she’d never have believed them.

Donna Marie Gordon is a 50-year-old grandmother who has worked as a carer for 25 years. She managed a team providing round-the-clock support to vulnerable children and adults. She had always worked and paid the bills, but there was never much left over for savings or extras.

The couple began staying in a series of grim hotels, hostels and B&Bs in Croydon.

They had no permanent home and each had their post going to different relatives. Then UK immigration got in touch to say it didn’t believe their marriage was genuine as they weren’t documented as living together. Donna’s husband is from Jamaica, they had been married 13 years.

“I was struggling to keep everything going, earning money, working seven days a week, putting money aside to pay for him to apply for his visa,” she says. “Then we lost”.

“All this has been the downfall of my life.”

Her husband was deported and Donna kept up an exhausting regime of work to send money to him in Jamaica.

She was in charge of the rota so she put herself on night shifts to give her a place to sleep.

Donna has always felt there are few problems that can’t be solved with enough tenacity. She battled on, saved enough for a rental deposit and moved into a new flat. She kept up an exhausting regime of care work, putting herself on consistent shifts for weeks at a time and saving to fight her husband’s case.

Then Donna got sick. “I had pneumonia and I didn’t realise,” she says.

Pneumonia turned into lung disease and Donna was put in an induced coma in hospital to recover.

“There’s a common public perception that people become homeless because they have brought it on themselves somehow,” says Director of Operations at homelessness charity Evolve Housing + Support Debra Ives. “But there are many like Donna who work hard, pay their rent and still end up homeless.”

Donna’s second and far more chronic bout of homelessness was caused by overwork.

While she was in hospital the rent on her property went into arrears and she began receiving threatening letters from her landlord. When she woke she chose a dignified response – paid everything she owed and move her stuff out.

But that move kicked off what Donna describes as “five months of hell.” She fought to get help but says it was difficult to convince people she was homeless.

Distraught, Donna walked the streets. “I’d walk until ten to midnight then call the Jury’s Inn Hotel hoping they’d give me a discount on unoccupied rooms.”

When she ran out of money she slept on buses. “Can you really sleep on the bus? I always pretended I was going to work. I had my watch and my phone and I kept checking them like a regular commuter.”

It was miserable killing time on London buses.

“Once I got a bus out of London and ended up in a terminal in the middle of nowhere, the next bus back wasn’t until morning so I had to sit shivering in a garden. Every time someone walked past I picked up my phone and said: ‘Where the hell are you? I thought you said you were coming.’

“I look back on these things now and think you’re such an idiot.”

Croydon council referred Donna to a temporary shelter and from there to a room with Evolve, where she has been for 15 months.

The Evolve accommodation – Alexandra House – is a friendly community, but for Donna in the beginning it was all too much.

“It was hard for me to ask for help. I’ve always been someone who worked, had my own stuff, cared for others, never had to rely on anybody.

“I thought just leave me alone.”

But when other people at Alexandra House heard Donna was a carer they began asking her for help.

“People came up to me in the laundry room and said, ‘Are you Donna?’ Then they’d tell me about their girlfriend/boyfriend troubles, their rent arears, everything.

Evolve is working with the local authority to get Donna a place of her own. “All I want now is to work and to have a roof over my head – a place to bring my grandbabies.

“Things are looking a lot better for me. I just persevere, that’s what I do. Through all of this the one thing that has kept me going is my faith.”