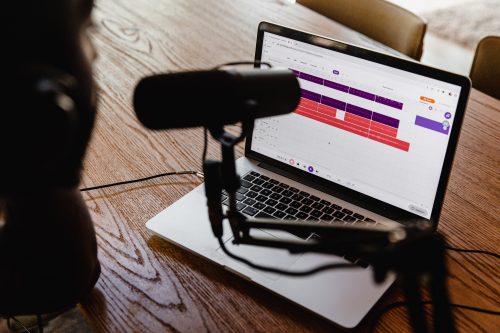 When you mention music, CJ comes alive. It’s that one thing that brings him the most joy in life.

“I want to produce something that’s broadcast to thousands of people in films, on TV or through the radio. I just want my music to be heard.”

CJ came to Evolve in September 2020 after a series of troubled experiences. It took some time at first to adjust to his new reality of supported housing, but soon, CJ became more aware of the things around him and the new opportunity he had to finally focus on something he was passionate about.

“I can say, not many people have gone through what I have gone through. It may not seem big, but being here means so much to me. I get to pursue music and I just think that makes such a big difference.”

CJ has been an essential figure at Evolve. He has worked with the team and other residents to get the Stockwell music project off the ground, dedicating countless hours to jam sessions, planning the layout of the studio and learning more about music. After a lifetime of not having a stable place to call home, he is determined to help create a music studio for other young people experiencing homelessness that, “when you walk through the door, it feels like home”.

“I’ve always been interested in music, but in 2013 it became an obsession.” CJ explained.

“During Primary school I used to play the cello, I used to do concerts and perform at opera houses. I even played for Boris Johnson when he was the Mayor at the Royal Festival Hall.”

“I love the way music relaxes me, helps me think, clears my mind and helps me to just calm down and take in words. Even if it’s just the instrumentals, it kind of helps. It can help people build a life they’ve always wanted. At least for me it has.”

When CJ first came to Evolve, the Stockwell music project had started up again following the first UK lockdown. Socially distanced jam sessions and music lessons ran every Thursday in the lounge room and prompted conversations between CJ, other residents and Manny, the project leader. CJ had originally planned to set up a small music studio in his room with a few friends who also lived in the service, not knowing Manny also shared the same interest.

“I was going to put sound pads up in my room and I’d already hooked my TV up to the wall. Then my friends left Evolve and found permanent housing. I knew I wanted a place to record music that I could share with other likeminded people, but I wasn’t sure how to pull it off. Then Manny shared his idea to turn part of the lounge into a studio. There were issues like sound proofing the space and figuring out how to separate the recording equipment from the rest of the room that was used for pool, boxing and as a kitchen space. Manny eventually found somewhere that was perfect for the project, in an old staff break room.”

Manny’s work at Evolve’s service in Stockwell stands as a testament to the passion he has for supporting the ambition of young people and the love he has for music.

Speaking about the project in an interview, Manny said, “Music is such a great medium to help and support people when it comes to mental wellness and I thought this was a great opportunity to do something life changing.”

For CJ, the importance of music and its effects are genuine and life changing. “Manny has helped me with a lot of stuff. If it weren’t for him… well there’s been times where my mind has been very depressed and Manny was there to help me get out of the mind-set, even when I hadn’t shown it. He’s just always been there for me. He helped teach me things, bring me out of myself and he’s helped me excel.”

With the desire to bring that same feeling to others in Evolve’s service, CJ began working with Manny and the Health + Wellbeing team to design and create Evolve’s first music studio. Over the course of the Christmas lockdown, CJ kept in contact with Manny and the team to coordinate on designing the space and filling up the studio.

“We wanted to make the place feel like it belonged to us. I wanted it to encourage other people in the building to embrace their own musical side to themselves. My vision is that when you walk into the music studio you can sit down and relax. I want people to feel like they’re at home.”

The beginning of 2021 has seen the project go from strength to strength, with the studio set to fully open when lockdown has ended. Unfortunately for CJ, 2021 hasn’t been so positive.

“This year [2021] has been difficult. Someone broke the laptop that I use for producing on Christmas day and I broke down. I still don’t have a laptop to produce my music and I’m looking for ways to afford that again”, CJ said.

“You know when a main character in a series goes on a journey to find themselves, I’m kind of like that right now. Hopefully this character finds a way to come back fighting. I just want my music to be heard.”

If you would like to offer any instruments, equipment, make a donation or fund this project to help it reach its next phase, please get in touch by email: communications@evolvehousing.org.uk