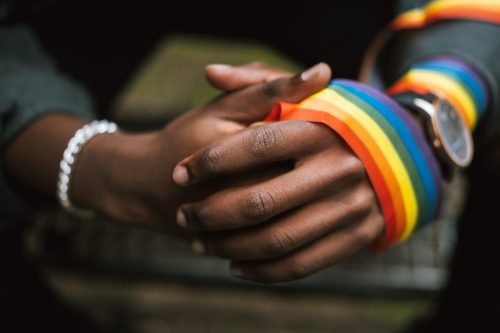 Throughout the Covid-19 pandemic families have been put under increased strain. Living spaces that were questionably small before, have become claustrophobic with the addition of lockdown measures. For Andrew, this has meant spending almost all his time in a two-bedroom apartment that he shared with his brother and mother.

While struggling to contend with the pandemic in such an oppressive living space, Andrew also struggled to cope with his mother’s alcoholism, his own identity as a transgender man and his family’s inability to accept his authentic self.

“I’ve always lived with my mum in that two-bedroom apartment. The council said we could use the living room as a third bedroom, but that seemed to mess my mum up a lot. She never had her own space”, Andrew said.

Before the pandemic, Andrew would spend their days seeing friends, going out and only coming back to sleep and eat. When lockdown measures came into place that’s when things changed.

“I would sleep all day and she’d get mad at me for it, but there was nothing to do because of the lockdown and the house wasn’t very big. I’d also be sleeping all day to avoid her, so it was like a complicated situation. That was the main reason when she said leave, I took the chance because I really wanted to leave anyway. I just didn’t know how.”

“I remember cleaning the kitchen every single night because it would get atrocious within one or two days. She’d wake up and be all nice because the kitchen’s clean and I thought like that would work to make her stop drinking and stuff. She would always be screaming, shouting, and getting drunk. Over the course of 2020, from January up until the time she kicked me out, she developed more and more hatred towards me.”

Andrew’s relationship with his Mum first became complicated when he developed as a teenager. At the age of 17, his mother found out through a friend that Andrew had another profile under another name. Andrew had been protecting his transgender identity, not knowing how his family might react, but when she did find out, Andrew recalls that “she barged into my room and said, ‘you’ll never be a man, as long as you’re under my roof.’ Looking back, Andrew admits that he wished he came out sooner and on his own terms. The two have never spoken about Andrew’s transgender identity and over the years they continued to drift apart.

“When my mum confronted me, I immediately went to my partners house at the time. We’ve never really spoken about it since, except when I became homeless. I remember that when I left, I actually shouted my name and my pronouns, and I felt free.”

Andrew believes his homelessness was a combination of his living situation that was strained under lockdown, his mother’s alcoholism, and her inability to accept him for who he was. After packing his bags and moving in with his ex-girlfriend temporarily, Andrew found that the next few months were fraught with difficulty as he fought to find accommodation through the council.

“My experience with the council was really really bad and I think that might have been because I said I was transgender. I thought it was time to be my authentic self now I wasn’t living at home, but when I went to the doctors and brought up my homelessness, they said ‘Oh yeah, women on the system tend to be housed quicker.’”

In response to this, and with the help of his ex, Andrew emailed several charities who specifically help young people experiencing homelessness. His calls for help were answered when AKT, a homeless LGBTQ+ youth charity, responded.

“They got back to me after my ex sent a really deep paragraph explaining how the council messed me about and how I thought it was because I put down that I am transgender. They helped me out a lot and went back and forth with the council for about five months.”

“If I was still waiting on the council, God, I don’t even know what would’ve happened. My case worker called me the other day and said, ‘So you’re not with us anymore, yeah?’ She’s only called me four times since I’ve been homeless.”

Since coming to Evolve Andrew has signed up for counselling to get the extra support to work through some of his experiences. After being forced to act like an adult, Andrew is now enjoying the freedom associated an adult life.

Since living away from his family Andrew has developed a healthy relationship with his mother and brother. Speaking about his brother, Andrew said, “He doesn’t leave me alone. He constantly texts me and I think it’s really sweet. He just turned 7 and I’ve noticed a shift in him dramatically and it’s kind of scary. Like, he’s gone from like starting arguments and being rude to sitting there and almost being a teenager.”

“My relationship with my mum has already changed for the better to be honest, and it’s changed dramatically. Whenever she sees me, she says she misses me and she’s affectionate and nice. She doesn’t really do all the stuff she used to do when I was around. I think our relationship has matured. She see’s me for the adult I am.”