Understanding homelessness is integral to being able to stop it.

We know from the people we see every day that the reasons people end up homeless are not only incredibly complex, but often stem from traumatic incidents in their childhood that they have been unable to recover from. This can lead to mental ill-health, drug and alcohol misuse, and leaving education early, all of which can be the start of a downhill spiral that results in homelessness.

We’re challenging people to think about the stories behind the faces they see on our streets. Only by increasing understanding and empathy can we start to break down the stigma homeless people face and help them get the support they need to live independent, fulfilled lives, breaking the cycle of homelessness.

We commissioned research to explore public perceptions of homelessness at a time when rough sleeping is on the rise.

More than a quarter of people in the UK (28%) believe people sleeping rough are themselves to blame for ending up on the streets.

Latest government statistics show a 15% increase in rough sleeping in the last year alone, rising to 18% in London*.

8% of the people we asked believe drugs or alcohol use was the main factor, 3% mental health problems and 1% childhood trauma. A further 1% believed an unwillingness to work was a primary cause.

A massive 72% believe that homeless people could get themselves off the streets if they wanted to, despite barriers like poor mental and physical health, and low literacy or numeracy skills due to education being cut short, which present huge barriers to them applying for jobs, avoiding debt or living independently.

Recent research of the homeless people we support highlights just how far these perceptions are from the truth.

A shocking 80% had experienced a childhood trauma including physical, sexual or emotional abuse, or violence within the family. More than a quarter (29%) said this was the primary cause of their homelessness. 87% of respondents had a mental health diagnosis.

Despite misconceptions about the reasons for people living and sleeping on the streets, people do want to help, with nearly two thirds of people (63%) doing something to help someone sleeping rough in the past year.

Half of people (50%) gave money or food directly, 22% gave money to a housing and homelessness charity, and 7% even offered a working opportunity.

Our 1-1 counselling service aims to promote good mental health and wellbeing by providing a high quality and professional service in a confidential and safe setting. The service is free of charge for all of our homeless customers.

To find out more about our work, please sign up here, and to donate to help us fund our vital counselling work, please click here.

“This research reveals that while the vast majority of people want to help rough sleepers, underlying this is a belief that they are to blame for where they have ended up.

“We want to stop homelessness in its tracks, whether it’s providing support to rough sleepers today, or working with children to stop it happening in the future. Our mentors help children who are at risk of becoming NEET (not in employment, education or training), and disengaging with their education, teachers and peers, to help them overcome the reasons for this and move forward to a future without homelessness.”

“Counselling is one of the best tools for dealing with trauma but it must be available quickly to have an impact. Our counselling is free, on site and available irrelevant of where the customer moves to.

At a time when local authority budgets are so stretched and NHS waiting times so long, we are going to miss opportunities to help people if we’re not able to provide services ourselves. That’s why we’re now appealing to the public to help us break the cycle of homelessness and turn people’s lives around.” 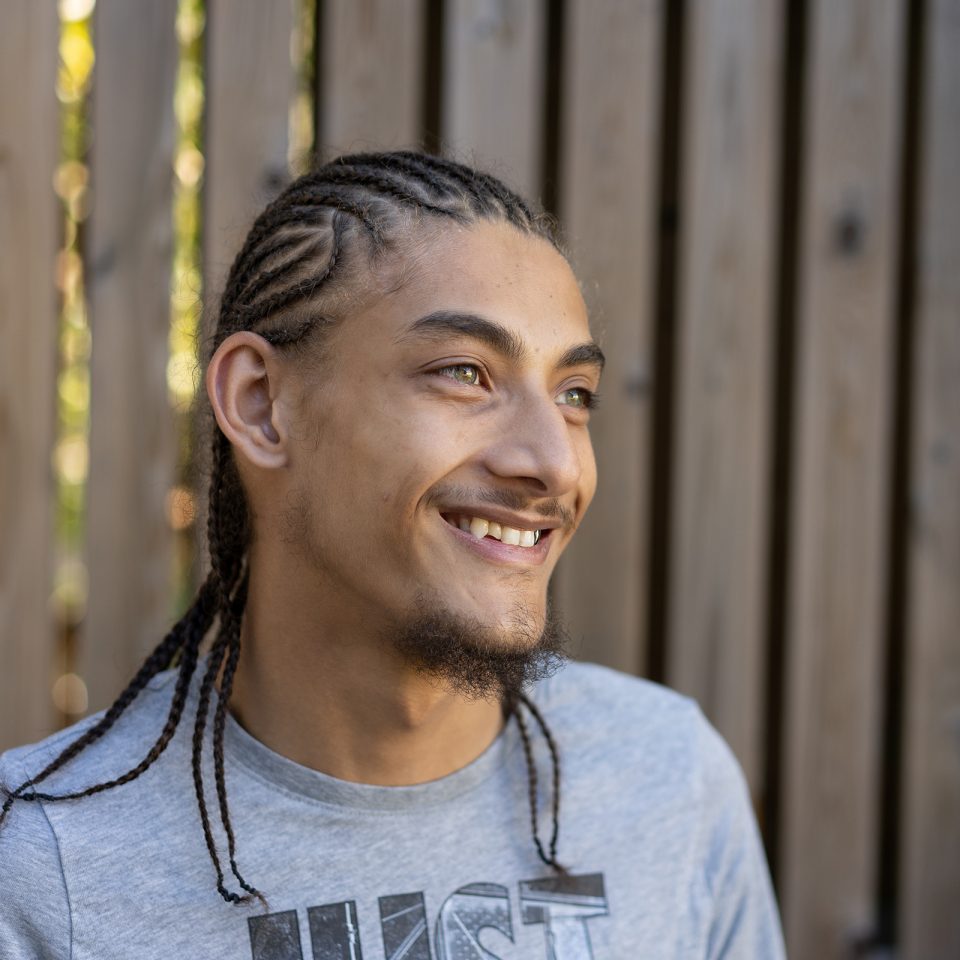 Sheldon has been with Evolve for 3 years

Sheldon lived with his Dad who drank a lot, and spent a lot of time in hospital. There were often times when Sheldon and his brothers and sister had no food in the house.

When Sheldon was a teenager, he often argued with his Dad, and between the ages of 16 and 18 spent months sofa surfing between friends’ houses. He would often get kicked out, and end up staying 2 or 3 nights on the streets.

When Sheldon was 17 years old went on a course with the Princes’ Trust learning English, Maths and employability skills. During this time Sheldon didn’t have anywhere to stay, and was in the cycle of sofa surfing and sleeping rough, often in parks and blocks of flats where it was warmer. The team leader on his course realised his situation and organised for him to be referred to Evolve. Sheldon is now considering a role in support working, and applied for Evolve’s trainee scheme.

Sheldon said ‘the worst thing is not knowing where you’re going to sleep that night. It was a worry about where I would be, that night, or in 5 years time. I’m grateful to staff at Evolve who supported me to make changes in my life. I’m ready for change and want to help other people to change their lives too. My goal is to become a support worker or do some kind of youth work.’ 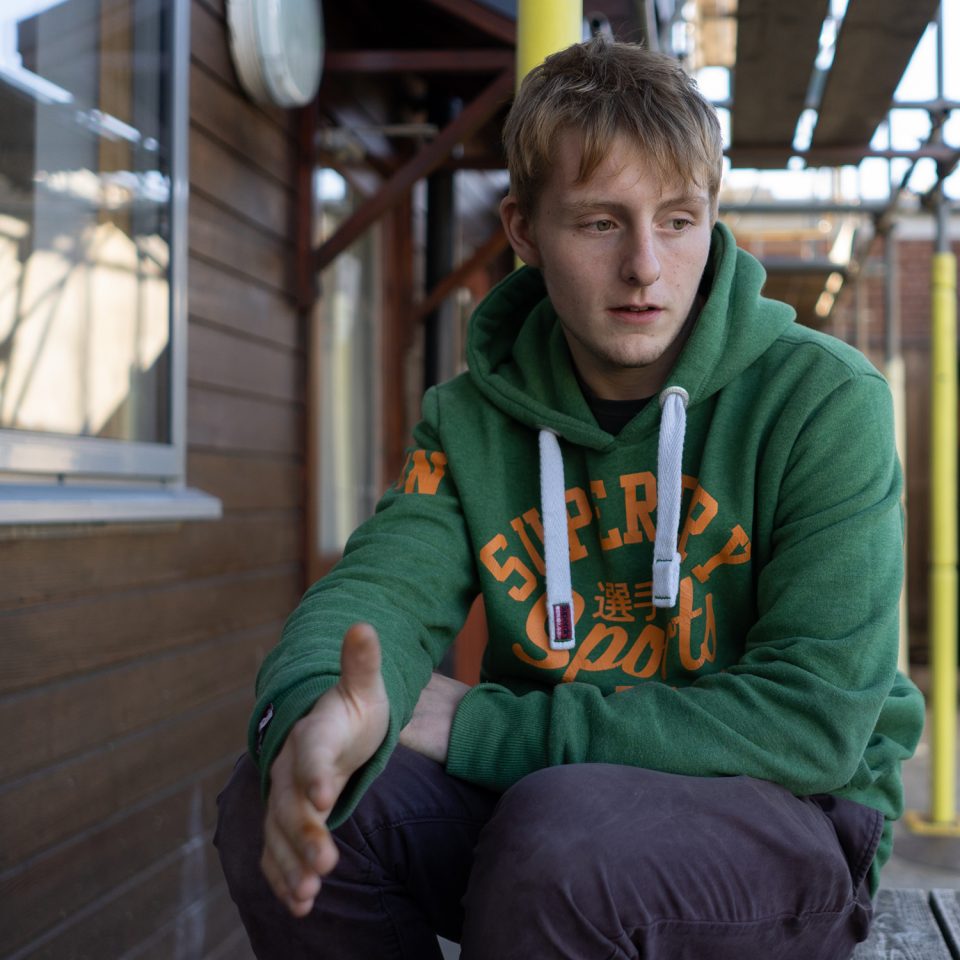 Matt has been with Evolve about 5 months

Matt was adopted by a family in Croydon when he was 7 years old, however when he was 18 his adopted family found it too difficult to cope with his behaviour, and Matt became homeless 5 months ago.

Matt said: ‘the hardest thing I ever did was to say sorry to my ‘original’ parents, because of how they treated me. I still feel bad for them in a way, they’re still out there, trying to make right of what they did wrong. But my soul is a pure ember of love. It will never burn out. Everything comes down to love.’

Friends are important to Matt, and since coming to Evolve, Matt has formed a strong friendship with fellow customer Luke. Matt says ‘we’re like squaddies, we watch out for each other. The whole word is one big family’.

Matt found it difficult focus at school, but still has hope to have a successful future, and is considering what to do. Since coming to Evolve, he has been involved in arts and creative workshops and programmes, and is currently taking singing and song writing classes with Crisis. He’s writing a song about his life. 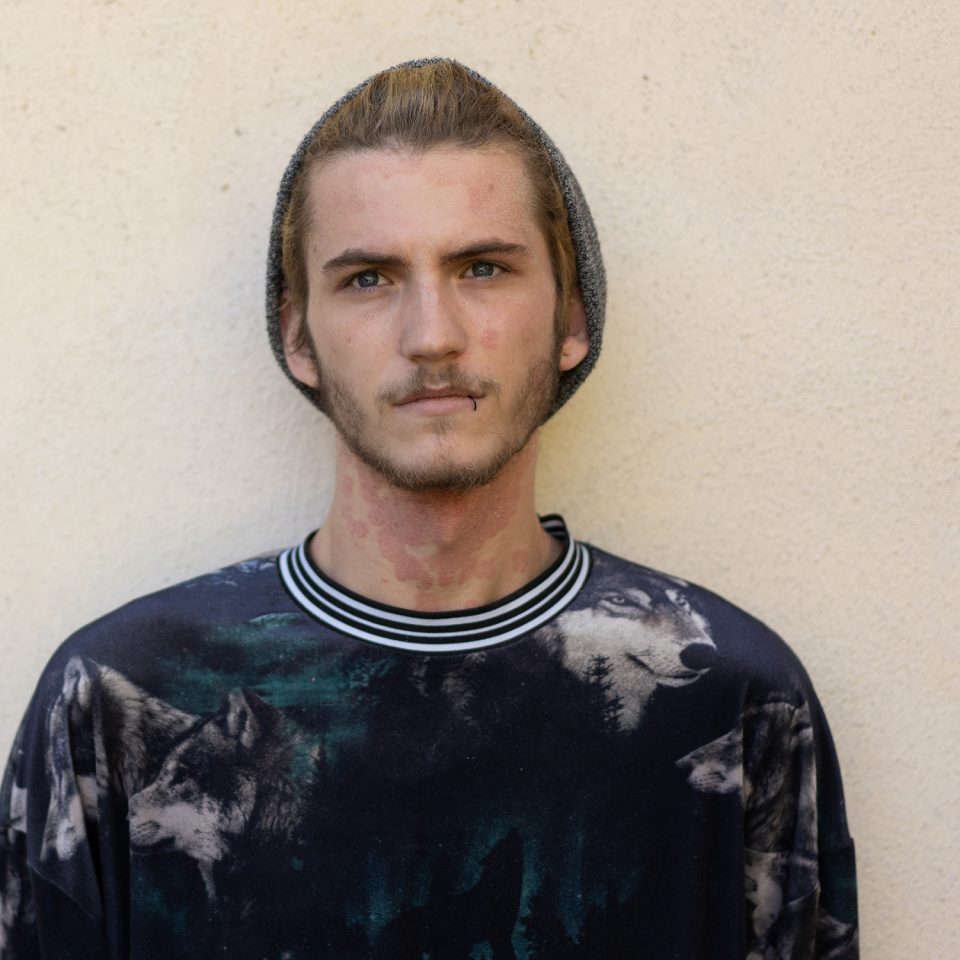 Luke has been with Evolve about 7 months

Living with his Mum and younger sister in Croydon, Luke was the man of the house. So when Luke’s mother’s new boyfriend wanted to establish his role in the family, Luke, aged 14, struggled to cope. As a teenager he struggled with anxiety and depression, as well as psoriasis, a skin condition caused by his anxiety, the result of being in hospital when he was a baby due to bad reflux and kidney problems. Aged 13, his GP told Luke that he was unlikely to live past 20. This caused Luke to self-harm, and between the ages of 15 and 17, he made several suicide attempts. He said ‘I didn’t want to be in this world. I wanted myself dead.’

Having been kicked out of home following ongoing arguments with his Mum’s boyfriend, Luke spent some time living with his girlfriend, but when they split up, Luke was forced back home. More arguments followed, and Luke stayed with friends for several months. He started working at Gatwick Airport but when his grandfather became ill, the stress got too much and he left his job and was asked to leave his friend’s house. Luke has been homeless for 7 months

‘Since coming to Evolve I realise now that the strongest people are those that come through their problems.’

Censuswide abide by and employ members of the Market Research Society which is based on the ESOMAR principles.

We help over 2,000 homeless people in London each year, providing not only housing but also support around life skills, work and learning, and mental health to help them move on and live independent lives.

As well as putting a roof over people’s heads, Evolve is a place of positive change and growth. It deals with the barriers that prevent them applying for jobs, avoiding debt or living independently. We provide specialised counselling for those with complex needs and compound trauma, while skills training and employment support helps them get and stay in work. As well as helping people who are homeless in adulthood, we also works in schools to mentor ‘at risk’ children to give them coping strategies to deal with challenges and trauma, in the hope that this will help to prevent homelessness later in life.

We will also be building more accommodation to house homeless young people,  and those moving from our supported accommodation who are ready to move on independently, but unable due to lack of genuinely affordable accommodation in London not relying on government or councils to.