Evolve News “I had no idea the street cleaners were so good!” What we learned from Pam’s Move53 challenge 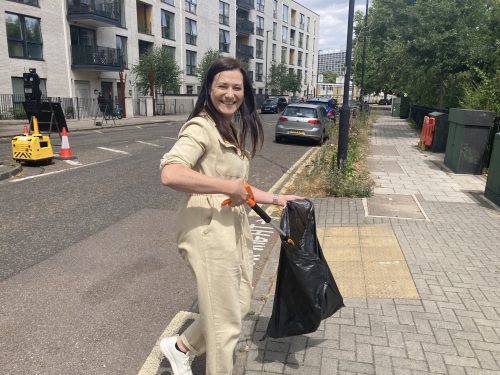 “I had no idea the street cleaners were so good!” What we learned from Pam’s Move53 challenge

In July Pam volunteered to take part in Move53, choosing 3 possible challenges which we then put to a public vote. You chose the challenge of picking up 53 bags of litter in a month, and four weeks later, she’s done it!

What did you think about people voting for the litter-picking challenge?

Voting was a fun way to do it. Not knowing what the challenge was going to be was really exciting and built the anticipation. At first I wanted to get one of the fitness related ones, but in many ways this challenge was nicer. It was certainly better for the community and the environment!

How was it to start with?

The first time I went out it was much slower than I expected – my first bag took about an hour because I couldn’t find much rubbish. I had no idea how good the street cleaners are! I went to parks thinking that there would be lots to collect there, but they were usually quite clean so I had to look elsewhere.

How did you get it done if it takes so long?

I started getting up really early, like 5am, to beat the street cleaners. Even then I realized I wouldn’t finish in time, so I started building the challenge into other everyday activities. I took bin bags and gloves everywhere, including when I met up with friends. I even let people out of a meeting at work early, as long as they used that time to go and collect litter!

Also, I did soon realise that when it’s sunny, there is litter left over from picnics and social gathering. Given the weather over the last few weeks, that means that there was enough to keep me busy.

Were people happy to help?

Everyone has been really encouraging – we all want to see less rubbish on the streets, and this challenge was also for a great cause. Some people helped pick stuff up, and others tipped me off about where they had seen lots of litter (behind Brixton police station was a ‘good’ place for it, strangely). People came up to me on the street and asked what I was doing, so I have been able to raise awareness about Evolve too. I’ve met lots of new people and had conversations I never would have had otherwise.

Were people interested in why you were doing this?

Absolutely. I explained that I was doing it to help Evolve move people on to new homes. Naturally people were keen to help, either by picking some things up or by donating. Thank you so much to everyone who did!

Why is Move53 and the work it supports so important?

Move53 is raising money to help us move people out of our services and into new homes. This is one of the most important parts of our work, because to stop homelessness for good, people need their own homes and the confidence to live independently.

Moving into a new home can be a difficult and scary process. It’s hard to find one in the first place, and then you may not have much to furnish it with when you get there. Some people can’t afford the cost of moving things, and others find it is a huge adjustment once they have moved. Everything Move53 raises will help us make the moving process easier and more supportive. We’ll keep providing what people need to thrive, from essential household items to personal support during the transition. No-one else is doing this, and by filling this gap we’re making a big difference.

You can still support Pam and donate to our work helping people move on to new homes here.