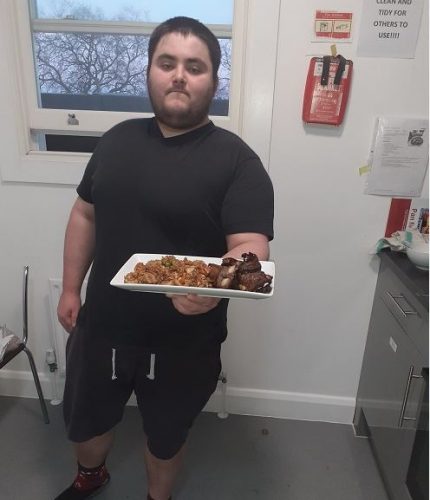 After hearing lots about his amazing meals, we went to Burton-White House to speak to James, a budding young chef currently staying with us. He told us why he cooks, how it can help people, and even gave us some recipe ideas!

“It started when I was young. I grew up in Mauritius in an Indian family where I was around it all the time – I watched my aunt cooking crab and fish, and there were often big pots of biryani and other curries going. There was something about the smells, the experience – it fascinated me.”

What is your favorite type of cooking?

“I try lots of things, but Asian and oriental cooking especially. There’s so much technique and work involved, and there’s a lot of passion in it.”

Any quick tips for us?

“In some parts of China they cook with Coca-Cola a lot. You might not think to do it, but I recently made some really nice pork ribs like that. Also, in Japan, a common breakfast is fish and miso soup.”

For breakfast? That sounds a bit too difficult…

“When people say they can’t cook, I say just enjoy it and go with the flow. Everyone can cook, you just have to risk failing. People often think of failure as bad, but that’s not true. Failing means you’ve learned something new. Say you grill a tuna steak and forget the salt – next time you know that you need salt.”

So, cooking can help you learn to fail?

“Worrying about failing can be a barrier to lots of things, and cooking can be a safe way to start addressing that. It’s one of the best ways to get out of that mindset, because in cooking you fail a lot.

For example, I now take part in a music session every week. I didn’t want to try singing at first, but then someone said ‘what can actually go wrong?’, and I really helped. Cooking is the same, and helps you practice that idea for wider life. I’ve cooked for years, but lots still goes wrong. I still need to measure rice when I cook it, for example!

How do you feel when you cook?

When I’m really paying attention and focused, there’s something about it that’s calming. You get into a space where it’s just you. Everything else fades and nothing else is in your mind. Your surroundings don’t even matter. That’s how it is for me.

What would you say to people who want to try cooking but don’t know how, or don’t have much money?

“I think more people should give cooking a try, you just need to get out of your comfort zone. You can make delicious food with really basic ingredients.

For example, cook some whole wheat pasta, then add tuna, raw spinach, sweetcorn and onions, salt & pepper, and extra virgin olive oil. The only bit you cook is the pasta, so it’s very simple. It might not sound that appetizing, but it’s delicious.

And again, don’t worry about failing. Failing has helped me learn and grow. In that way cooking is the same as anything you do.”