Evolve News Knowing yourself: a story of overcoming from an Evolve service-user and volunteer 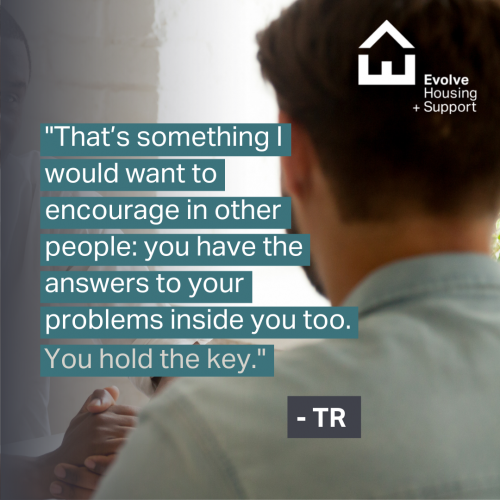 Knowing yourself: a story of overcoming from an Evolve service-user and volunteer

Please note that this account mentions thoughts about suicide and depression.

“I was facing rejection after rejection. That’s a hard thing, and after a while it gets you. You start to think you’re doing something wrong, that you will always be rejected.

It creates unknowns, because you don’t know what to do next. In response my mind started to play out scenarios that didn’t exist, which led to anxiety, panic attacks and depression.”

After years of planning to join the army, TR was left unsure of what to do after his application was unsuccessful. Subsequent rejections from jobs and apprenticeships left him feeling hopeless, struggling to stay afloat.

“It got to a point where I was facing really bad depression. I had been unemployed for a while and didn’t know what to do. In total I spent between two and three years completely indoors. I never went out, never spoke to anyone, and could spend 2-3 months in the same clothes. I would overthink which would lead to panic attacks. They were really bad.

I thought I wasn’t doing any good for anyone, including myself, so I started to make plans to end it. My Dad had actually done the same thing when I was a kid. I felt rejected to the point where I rejected myself.”

At this point, TR reached out to his sister about what had happened with their Dad. She told him she had got therapy to help her manage it, and shared the details of someone she had spoken to. That was when TR first accessed some support.

“Therapy isn’t a one-off thing. It’s continuous. We don’t always realise what is inside us, and sometimes things take a while to pop up. I learned CBT (Cognitive Behavioral Therapy) techniques to start with, helping me manage day-to-day. But sometimes that opened up other things and I found that new issues arose. So, as well as CBT I did deeper work, looking into myself and identifying where my barriers and triggers were.”

It was at this point, after working through things for a few months, that TR came into contact with Evolve.

“It was a volunteering thing first – I wanted to be doing something. But then alongside that I was put in touch with their Health + Wellbeing team in case I wanted further support. I wanted to give something back, but also had things I wanted to work on myself.

It would have been a lot harder to be where I am now without the support of Evolve, who have helped a lot in my development. The opportunity to both volunteer my time and receive support really worked for me.”

Now, having developed new tools and gained new experience, TR is looking at ways to help others. He has done some therapist training and also worked with children with special educational needs.

“People say things get better with time. That can be true, but not because things disappear – it’s because you get the tools to manage them. In terms of developing myself, I’ve achieved a lot more in the last four years than I did in the decade after high-school.

Those ten years of rejection and suffering led me to where I am, and helped me to learn where I want to go based on the bad experiences. Now I want to help other people.”