Evolve News “It’s like they don’t go together.” On painting and depression 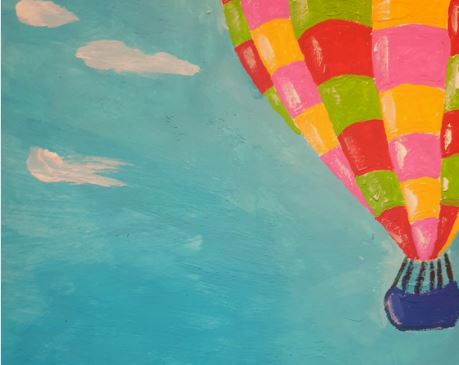 “It’s like they don’t go together.” On painting and depression

A perspective from a former Evolve resident, Mylène.

Recently somebody asked me to paint 20 greetings cards for them. This is something I often do for friends and family, but this time there was a problem. They wanted lots of the same design.

You might think that would help – after all, I could paint the same parts over and over, and the whole thing would be quicker? Well, no. When painting starts to become mechanical you lose the excitement, and that excitement is the whole point.

I don’t know how I took to painting so quickly, but I do know that it only happened after my depression intensified.

Depression is a truly a horrible feeling. The name doesn’t do enough to describe it – it isn’t just a slump, it is something that eats your insides. Like a cancer of the soul.

I had it long before I realised it, but several years ago it became impossible to ignore. I couldn’t be around people, and I started to get panic attacks and suicidal thoughts. Ultimately it put me in hospital, and on a path towards Evolve as well, where I stayed for 5 years. I don’t know how long it will stay with me, but at least now I have found a weapon against it.

When I’m painting I can put depression aside, as if it’s forgotten. For me it’s like the two just don’t go together. I can’t think of them at the same time.

When I did therapy, it gave me clues as to how I was feeling and why, but it never changed how I felt. Painting does. It gives me power over depression, and means that it isn’t leading anymore, I am. When I paint I am in the moment, and it is very exciting.

It can also help more practically. For example, I need to wash the brushes and paints so that they don’t spoil, and whilst doing that I might realise that there are dishes that need doing. Suddenly I’m moving around and doing things, which is particularly important if I’m having a down day.

Of course, there is no quick fix to depression, and painting certainly doesn’t fix everything. I still struggle with groups of people, and sometimes I will look at the front door and feel like I can’t go out. But when this happens, I don’t force myself or make it a big thing – I say ‘that’s fine’, and try again the next day.

Some time ago I did a painting of two staircases side by side, which demonstrates this idea well. Stairs can go both ways, like we all can; there will be ups, and there will be downs. Every day I look at it, and it helps me to understand what’s happening and how I’m feeling. Things won’t always be up, but they won’t always be down either.