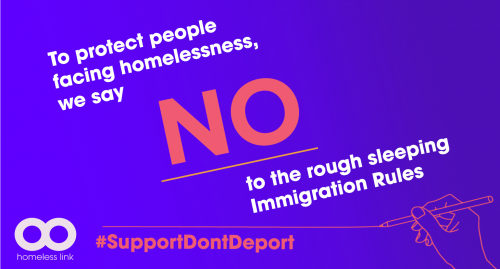 Evolve Housing + Support has signed Homeless Link’s campaign putting further pressure on the Government to scrap new changes to the Immigration Rules that make rough sleeping grounds for refusing or cancelling a person’s leave to remain in the UK.

Responding to news of these new rules in November 2020, Evolve Director of Operations Alice Hainsworth said:

“The government’s resumed evictions of refused asylum seekers is wrong and seriously concerning. What’s more concerning still is that new rules from the Home Office are putting people with a history of rough sleeping at risk of having their leave to remain cancelled.

“We believe both of these actions will profoundly affect the mental and physical health of people that are in the UK legally and who are facing homelessness.

“The fact that some migrants’ leave to remain in the UK does not permit them recourse to public funds, which in turn prevents them from accessing support such as housing benefit, is unacceptable. It has and will continue to produce an inhumane environment that punishes people who are in need of support.”

“We urge all local authorities and homelessness organisations to join this campaign to end the use of these immoral immigration rules which threaten the most vulnerable in our society.

“We stand in solidarity with non-UK nationals and pledge to continue to push for a fairer system that doesn’t target and discourage those that need support.”

Homeless Link are calling on other homelessness groups and local authorities to sign the pledge, spread the word and support this campaign. FIND OUT MORE.

On 6 November 2020, Evolve Housing + Support signed a letter alongside other London-based charities and representatives of local authorities that was sent to the Home Secretary Priti Patel and Housing Minister Robert Jenrick, urging for these rules not to go ahead.