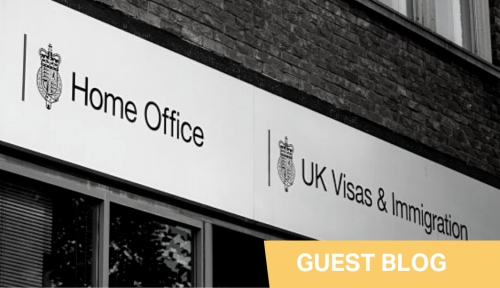 Words by Holly Barrow from the Immigration Advice Service

The UK’s asylum system has long been criticised for its failures to protect vulnerable people often fleeing war-torn environments or persecution. Far preceding the pandemic, the government has been called on time and again to reform the asylum system, eradicating its hostile nature which regularly sees those seeking asylum waiting unacceptable lengths of time before receiving the assistance they are entitled to, or in many cases, not receiving this assistance at all.

A 2017 report by Refugee Action highlighted just how flawed the UK’s asylum system is, with the organisation describing how it frequently provides help to those who have been living on the streets and haven’t eaten properly in weeks. This is despite the Home Office having a statutory obligation to ensure that those who are at risk of destitution or who cannot return to their country of origin are provided with support – even if their asylum claim has been refused. Refugee Action emphasised that many of those who are entitled to government assistance – such as Section 95 support for those whose asylum claims are currently being processed, or Section 4 support for those whose claims have been refused but who are destitute – are often wrongly denied this assistance.

As a consequence, those who are wrongly denied support are left to fend for themselves – despite being banned from working. Those whose asylum claims have failed and who are refused Section 4 support (state-funded accommodation plus £35.39 per week) despite being destitute or unable to leave the UK are regularly evicted from their temporary asylum accommodation and made homeless. This should not be the accepted norm and yet it has become commonplace for the government to leave asylum seekers in destitute conditions, with them relying on the generosity of third sector groups which are under increased financial strain.

Fast forward to 2020 and the asylum system remains this way, even in the midst of a global pandemic. At the end of March, as the UK began to weather the storm of Covid-19, the government announced it would be temporarily suspending all evictions of British citizens, migrants and asylum seekers from private and social accommodation in an attempt to protect all throughout this crisis. It began moving asylum seekers into hotels as a form of emergency accommodation, due to asylum accommodation typically being communal and thus presenting a greater risk of spreading the virus.

The suspension of evictions was a welcomed move, with charities and MPs having urged the government to protect the most vulnerable. And yet, now, as the UK teeters on the edge of a second national lockdown – with many regions across the country under Tier 3 and Tier 2 high-alert restrictions due to rising Covid-19 cases – the government has resumed the evictions of refused asylum seekers.

Recent Home Office statistics revealed that there has been a 572% increase in applications for destitution funds from migrants between April and June 2020, with many having lost their jobs or hit with significantly reduced hours. With a vast majority of migrants and refugees subject to the No Recourse to Public Funds condition, a rise in unemployment and slashed working hours has had devastating repercussions. Despite being aware of the challenges now faced by thousands across the country, the government is willing to resume the evictions of refused asylum seekers, allowing them just 21 days to leave the UK.

Even in normal circumstances this ought not to happen, since initial refused asylum applications are often overturned upon appeal, meaning many of those whose asylum claims are refused go on to be granted asylum. In fact, in the year to June 2020, the proportion of asylum appeals allowed stood at 45% – this means that 45% of appeals against Home Office refusals were overturned by the courts.

But to resume this process of eviction now, with a public health crisis still far from over, the government is knowingly endangering some of the most vulnerable groups. After local authorities have called on the Home Office to halt evictions, a judge ruled that evicting refused asylum seekers from emergency accommodation in areas under tier 3 coronavirus restrictions could place communities at harm in breach of their human rights.

The UK government must act on this ruling immediately and ought to bring an end to the evictions of asylum seekers both during the pandemic and beyond. Under the current circumstances in particular, to continue with such evictions shows a callous disregard for human life.

Holly Barrow is a political correspondent for the Immigration Advice Service – a team of UK immigration solicitors providing legal assistance with all asylum, leave to remain and settlement queries

“The government’s resumed evictions of refused asylum seekers is wrong and seriously concerning. What’s more concerning still is that new rules from the Home Office are putting people with a history of rough sleeping at risk of having their leave to remain cancelled.

“We believe both of these actions will profoundly affect the mental and physical health of people that are in the UK legally and who are facing homelessness.

“The fact that some migrants’ leave to remain in the UK does not permit them recourse to public funds, which in turn prevents them from accessing support such as housing benefit, is unacceptable. It has and will continue to produce an inhumane environment that punishes people who are in need of support.”