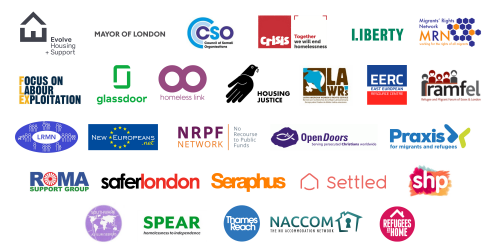 Evolve Housing + Support has joined with dozens of charities in condemning new immigration rules announced by the Home Office.

Under the new legislation, ready to be introduced by the end of the year, migrant rough sleepers can have their leave to remain cancelled or refused, resulting in them being deported.

The letter that was sent to the Home Secretary Priti Patel and Housing Minister Robert Jenrick was signed by 27 representatives of local authorities and London-based charities, including Evolve Housing + Support and calls for five proposals.

READ THE FULL LETTER BELOW

We are writing to you as local government and civil society organisations to urge you to reverse deeply concerning plans to use rough sleeping as a ground to remove certain migrants from the UK. Instead, we urge you to take compassionate and exceptional measures to avoid thousands of non-UK nationals falling into destitution and street homelessness during a global pandemic and the deepest recession in generations.

A significant proportion of non-UK nationals cannot access either welfare benefits or homelessness assistance in the UK. As a result, their accommodation and support options are extremely limited. The solution is for the Government to increase support for this group, not to strengthen policies that would further limit their access to essential services.

The Greater London Authority (GLA), London boroughs and civil society organisations acted swiftly to accommodate and support thousands of London’s rough sleepers, regardless of immigration status, in response to the pandemic. We did this with central government support under the “Everyone In” programme to respond to an unprecedented public health emergency. This emergency is still ongoing, but funding put in place by the Government is coming to an end, and measures like the suspension of asylum cessations and the ban on evictions have been lifted. No alternative measures have been put in place to allow all destitute non-UK nationals to access mainstream support.

Changes to the Immigration Rules making rough sleeping a legal ground to cancel or refuse permission to be in the UK from 1st December will deter already vulnerable people from seeking help to rebuild their lives off the streets, and put them at greater risk of exploitation and infection from Covid-19. Although the rules currently have limited application, they set a dangerous precedent and rather than supporting people to come off the streets, these new rules will punish rough sleepers simply for not having a home.

Draft legislation suggests EU citizens who do not satisfy the EEA Regulations 2016 and have not yet obtained status under the EU Settlement Scheme (EUSS) will not be able to continue to work and live their lives in the UK as they do now after the end of the transition period. This will impact many homeless EU nationals who are less likely to be currently exercising treaty rights and who might become undocumented from January 2021, making it more difficult to find routes off the streets. The 31st December marks not only the end of the transition period, but also the end of the suspension of derogation which has allowed some support to be provided for EEA nationals. This may see support provision for vulnerable EU rough sleepers substantially reduced at a crucial time.

The Covid-19 crisis has placed extreme pressure on already-stretched local authorities who in most cases cannot afford to accommodate non-UK nationals with no or limited entitlements on an indefinite basis. Civil society organisations are reporting reduced capacity and uncertainty about how services can operate safely within Covid-19 restrictions. This includes the network of night shelters with shared sleeping spaces, which this year will be substantially reduced as they are not Covid-secure.

The Government must withdraw the new Immigration Rules and instead urgently implement measures to allow all those unable to self-isolate, including all non-UK nationals, to access appropriate support. Our proposals are as follows:

Measures taken as part of the ‘Everyone In’ programme resulted in very low Covid-19 infection rates amongst homeless people in London[1]. Without a robust plan, including legislative changes, there is a real risk that all the positive work we have jointly done will be undermined, and that we will see soaring Covid-19 infection rates among rough sleepers spreading to the wider community as a result.

We would welcome an urgent response on the points raised in this letter.