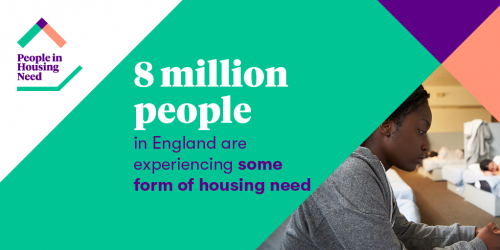 Evolve responds to the ‘People in Housing Need’ 2020 report

The National Housing Federation’s latest report has revealed startling figures that evidence the need for a substantial investment in the social housing sector, as numbers for those needing social housing in England rise to 3.8 million people.

“We fully support the National Housing Federation’s (NHF) Homes at the Heart campaign which sits at the center of its call for greater social housing.

“The latest figures contained in their ‘People in Housing Need’ report, has highlighted the gravity of the housing crisis and a reality all too familiar to millions of British people.

“1.6 million households – 500,000 more than the 1.16m households recorded on official waiting lists – need access to social housing. It is of serious concern that due to the shortage of social homes, some people have been on their council waiting list for almost two decades and still may never be housed. The longer a person has to wait, the greater their risk to becoming homeless. It is unacceptable that there is such a distance between demand and supply, and we urge the government to invest more in social housing.

“Homelessness figures and people in need of social housing are likely to spike in the coming months as a result of the Coronavirus crisis. Without a comprehensive strategy and government assistance, the eviction ban ending, expectations of mass unemployment and winter will create a ‘perfect storm’.

“The need for social housing investment is vital to break the cycle of homelessness for thousands of people. It provides more stability and support to those who move on from homelessness than private rented housing.

“To echo the words of National Housing Federation Chief Executive Kate Henderson, it is time to make a ‘once-in-a-generation investment in social housing and put homes at the heart of its plans for economic and social recovery.’”