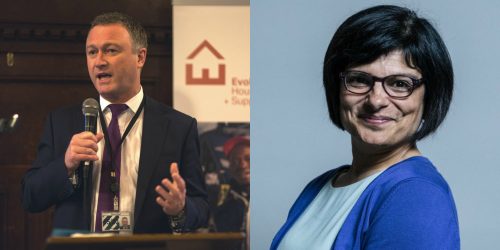 Thangam Debbonaire MP has been appointed as the new shadow housing secretary, replacing John Healey, who has been in the role since 2016.

Steve Reed MP has been appointed as the new shadow communities and local government secretary, taking over from Andrew Gwynne MP who held the position since 2017.

Evolve Housing + Support is congratulating both MPs on their appointment and greatly looks forward to working with them on the issue of homelessness and housing in London. The organisation wishes to also thank Andrew Gwynne MP and John Healey for their incredible work over the past three years in the shadow cabinet.

“We welcome Thangam Debbonaire’s appointment as Shadow Housing Secretary, which comes at a critical time for the housing sector.  With a background in the third sector, she will be all too aware of the major issues and uncertainties as coronavirus continues to dominate political decisions and policy.  We look forward to working closely with Thangam on the crucial issues of supported housing and homelessness in London.

“We also wish to congratulate Croydon North MP Steve Reed on his appointment as Shadow Communities and Local Government Secretary.  We have several services in Steve’s constituency, and have worked closely with him for a number of years.

“We look forward to working with him in his new role, in which we are sure he will be a great success.’’