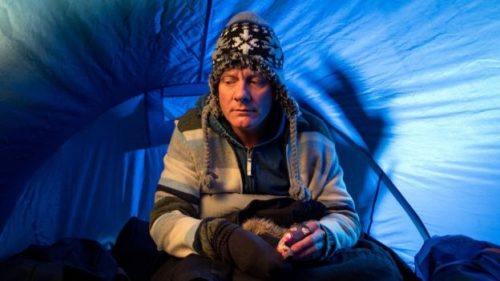 As Coronation Street kicks off a hard-hitting plot for Sean Tully this week (9 July), homelessness charity Evolve Housing + Support is calling on the public to help people sleeping rough in the days and weeks ahead.

A run of bad luck sees Sean (Antony Cotton) forced to live on the streets after falling out with his friends, and eventually sleeping in a tent in a car park. Sean’s bad luck continues over the coming episodes as he is mugged, beaten up and left to beg for spare change.

“Becoming homeless is usually triggered by a major life event like the breakdown of a relationship, the loss of a job or ill health. Sean’s storyline is a useful reminder of just how easily it can happen and shows the importance of having a support network to stop a personal crisis from spiralling into homelessness.

“For anyone sleeping on the street, life can be a struggle just to survive. Homeless people often live in constant fear of violence and most will experience abuse or antisocial behaviour. Challenges can get worse and more complex the longer people live on the streets, which is why it’s important that they are helped as quickly as possible to get their lives back on track.

“To refer a rough sleeper to StreetLink, a website which allows members of the public to alert local authorities to people sleeping rough in the area, please visit www.streetlink.org.uk.”

Evolve currently offers counselling to homeless people across London, but funding for these services is coming to an end in September 2018. The charity aims to raise £110,000 to continue its services for two years and help more homeless people rebuild their lives. For more information on Evolve and to donate, visit www.evolvehousing.org.uk.

For more information or to interview an Evolve spokesperson contact Kate Beard or Eleanor Wilson at Amazon PR: Eleanor@amazonpr.co.uk or call 020 7700 6952.

About violence on the streets

*Survey of homeless people carried out by Crisis in 2016

Evolve Housing and Support is a leading homelessness charity in London providing shelter and support, working with 2,000 people each year.

In July 2016, Evolve launched CR Zero 2020, a campaign to engage the local community in ending rough sleeping in Croydon. This included mobilising 100 community volunteers to get to know every rough sleeper in Croydon by name, understand their needs and find out what they need for a sustainable route off the streets. Find out more here: https://www.evolvehousing.org.uk/understand-our-work/cr-zero-2020/