Evolve News ‘The moment of crossing the line was euphoric.’ 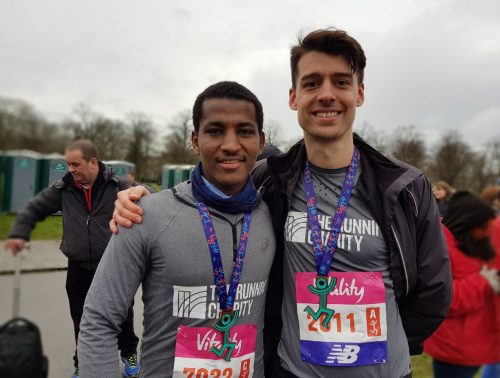 ‘The moment of crossing the line was euphoric.’

We are delighted to be partnering with The Running Charity, who seek to harness the benefits of running and fitness to help to transform the lives of young people experiencing homelessness.

Below is an extract from Theo’s blog post about mentoring one of our amazing customers, Abiel, in order to participate in The Big Half-Marathon. (You can read the full story here.)

‘I first came across The Running Charity (TRC) when I was considering setting up a running group at a homeless shelter on my road. I thought I would check out whether a similar thing was being done, and within a few seconds research, I discovered TRC. Whilst on the website, I spotted the mentoring scheme, and immediately knew that I was better off joining a group already doing this fantastic work, than trying to set up my own running group.

I am extremely passionate about running, and about the undeniable benefits it brings to health and wellbeing. So, I decided I wanted to share my passion for running, and also share its benefits, by becoming a mentor for TRC. Once my DBS came through, I was paired with Abiel, a charming young man from Eritrea living in an Evolve Housing + Support hostel, in West Kensington. He had shown interest and promise at some of the group sessions at his hostel, and wanted to take his running further.

Our first run together was the Highbury Fields Park Run at the beginning of December 2017. It was an icy cold morning, and Abiel ran in his denim jacket, jumper and tracksuit bottoms! Nonetheless, we finished the run in 36th place, in just 21 minutes!

A few weeks in, Ezrin (from TRC) and I decided it would be good for Abiel to work towards The Big Half as his goal. Despite his lack of distance running, I knew Abiel was capable of running 13.1 miles, and in a decent time too. At first, Abiel was reluctant, but he agreed, and so we started to train, focusing on The Big Half.

After a month, I tried to encourage Abiel to run on his own in the days in-between our Friday runs. Initially, he said if he was on his own he could only run to the end of the street and he would be tired. But he started to do it, and is now running 2-3 times a week including our run. This is a great example that exercise can become an important part of a person’s weekly routine, and brings so many benefits with it.

Throughout, Abiel has remained committed and enthusiastic. During our runs, Abiel and I have learnt about each other (he has an inspiring story, which it has been fascinating to learn more about), and in the months we have been running, his English, and our communication, have improved brilliantly, and he has become much more confident when talking to me. Proof that the social interaction of running can be just as beneficial as the health improvements.

As an incentive to stick at the mentoring, TRC give running gear to the young people, as something to aim for. It was a real pleasure for me to be able to give Abiel his well deserved kit as reward for his hard work and commitment.

The culmination of three months hard work came when Abiel and I ran The Big Half together. Fortunately, the recent snow had cleared, the sun was out, and it was great conditions for running. Before the start, we took some photos amongst the other runners on Tower Bridge and soaked up the atmosphere; we were excited to get going! The support from TRC volunteers and staff was excellent, and gave us a boost every few miles. Abiel had a sprint finish, and the moment of crossing the line was euphoric. By this point, it wasn’t about the time it took at all, but the enjoyment of working hard towards a goal and achieving it, but Abiel had absolutely smashed it, and we finished in 1:34 minutes! We were both delighted and it was a fantastic reward for the hard work that Abiel had put in over the three months. It was one of the running events I have been most proud to be a part of, and it was a great feeling to share in Abiel’s achievement.

Abiel now tells me he wants us to run a 1:10 half marathon! This is well out of my reach, and I don’t have Abiel’s youth on my side, but if he continues to show the commitment and enjoyment for running that he has done, and works towards the goal, then anything is possible!’

If you would like to find out more about The Running Charity’s innovative work, please click here.

If you would like to learn more about our hostels for homeless young adults, please click here.