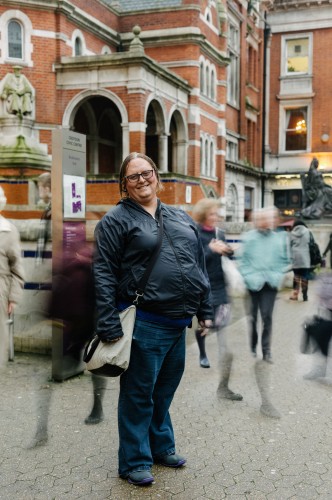 Nicole believes her life has changed ‘immensely’ since coming to live at Eva House, part of our mental health step-down service for homeless people in Croydon, in 2011.  She wanted support with budgeting, self care, and having the confidence to live as her true gender.

‘Before, I was worried about how people would react to seeing me as Nicole, rather than as Eric. I remember first coming down the stairs at Eva House as Nicole, to a house meeting with other customers. It was very difficult, emotionally draining, and stressful. But it was also exhilarating and exciting, because that was what I wanted for the rest of my life. Thankfully, my impact on other people has been less than I thought; I was accepted by everyone and they’ve given me as much support as I needed in order to start living as Nicole full-time.’

In 2014, Nicole moved to our second stage service Emily House, and feels confident in looking after herself better.

About moving on, she says ‘It’ll be sad to leave Evolve because they’ve done so much for me, but because of the support I have had, I feel more equipped to live independently and go out and do things. Being here has given me a sense of purpose. Evolve has played a great part in me becoming who I want to be.’

If you would like to work for one of our services helping homeless people in Croydon, please see our vacancies page.

If you would like to donate to help us support homeless people in London, please see our donations page.