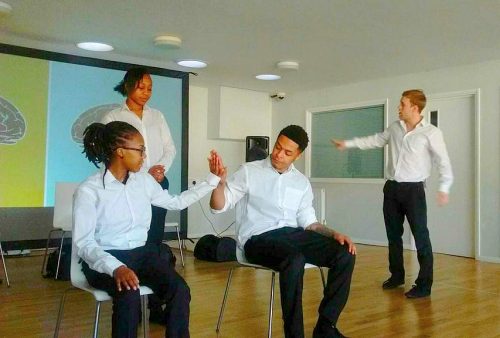 Every action has consequences: Cardboard Citizens perform 'Meta' for Evolve

A young couple sits on a bench, slowly drawing close. Lips meet. And in the night sky above them, the moon is blotted out by an explosion of emoticons, some ecstatic, some excited and some pouting flirtatiously.
Things can only go downhill from here, as the characters of Meta will soon discover.

On Thursday 18 February, Evolve customers and staff gathered to watch the theatre company Cardboard Citizens perform their latest play Meta (written by Sarah Woods).
The piece was both innovative and poignant, aimed at secondary schools to help explain the origins of one young person’s journey into homelessness.
Cardboard Citizens have been touring around schools and hostels over the last few weeks, performing Meta to over 2,000 school children in the Tower Hamlets area.

The play tells the simple but thought-provoking story of two teenagers struggling to communicate with each other and the society around them; where seemingly small or innocent actions have devastating long-term consequences as situations spiral out of their control.
But what truly sets Meta apart is the fact that this straightforward plot is made multi-layered by the addition of neuroscience.
An interactive backdrop filled with bright images explains how our brains develop and change over time.
Meta doesn’t just focus on the actions and dialogue- it delves further. It looks at the neurological functions and processes that occur behind every frown, every thought and every word. Emotions, impulses, reactions and movement are all explained in snappy, fluid scenes and animated screens.
A moment of great impact is broken down to the very messages sent inside our brain to help enlighten the audience not only why we behave in certain ways but also how.

Humour and pathos walk hand-in-hand throughout Meta, with the use of emojis to give insight into a particular character’s thoughts and feelings. Relevant topics such as bullying, dating, self-harm, mental health needs and a cause of youth homelessness are covered during the performance before the audience are asked to participate at the end.

Tony McBride, the director of Meta asked the audience to pick key moments within the play and after the actors had re-enacted these scenes, the people watching were invited to offer different ideas and solutions that would provide the characters with more hopeful outcomes.
If Tony liked a particular suggestion, the hapless audience member was asked to then come onto the stage and step into the character’s place to act it out! This was met by both amusement and terror, but participants enjoyed it nonetheless.
A neuroscientist, who had worked with Cardboard Citizens as they researched the play, was also on hand to help explain certain brain functions and impulses, which helped shed light on some of the more complicated scientific elements of the piece.

Despite the fact that the target group for this production are teenage school children, there is something in Meta for everyone- a situation, memory or character that is relatable, with an imaginative script that allows the audience to draw their own conclusions about one of the causes of homelessness and the heart-wrenching consequences of a series of misunderstandings and miscommunication.
Meta, in the end, is a piece that leaves you thinking about thinking.