Evolve News ‘It brought everyone together.’ 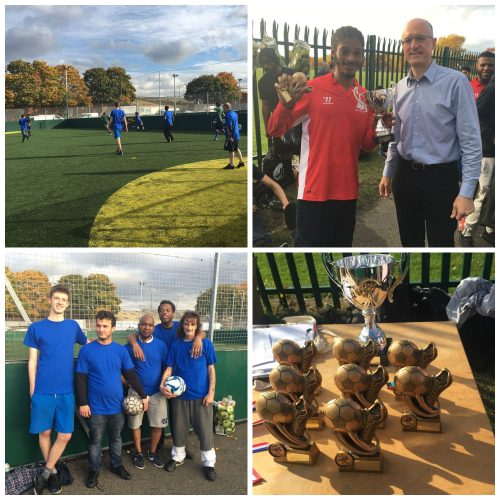 ‘It brought everyone together.’

At the end of October, we held our first 5-a-side football tournament at the Powerleague Soccer Centre in Croydon. Staff, customers and voluntary organisation, Airsports teamed up to compete for first prize. There were two leagues: Stockwell, Burton-White House with Beacon House and Airsports formed one whilst Palmer House, Ingram Court and Airsports also formed another.

Staff volunteered as referees or simply turned up to chant their support enthusiastically from the side lines. Food and drink such as fruit shoots and sandwiches were also provided in order to keep everyone warm and energised. Each game lasted ten minutes and the winners from each league were declared and went on to compete in the finals. Stockwell vs. Airsports.

At the end of the tournament, Airsports were declared the victors and our Chief Executive, Jeremy Gray, presented their team with trophies and medals.

The money also went towards hosting another Open Cinema Foundation season for our customers, more photography workshops with Accumul8 and also helping to fund our campaign to end chronic street homelessness in Croydon: CR Zero 2020.

“It was great to see both staff and customers get involved with a team-bonding activity which boosts morale as well as physical and mental health.” said Jeremy, “We are grateful to Nationwide for funding this tournament as it brought everyone together for truly enjoyable event. “

To find out more about volunteering with homeless people, click here.