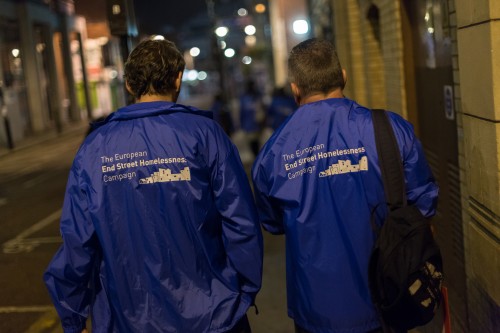 Connections Week finally arrived last week.
After the bank holiday Monday, the first survey shift of the rough sleepers in Croydon began on Tuesday night.
Volunteers gathered at Alexandra House, which acted as a hub during the week, collected their iconic blue anoraks, surveys and clipboards and were prepped by their team leaders.
Armed with pens and torches, the teams went onto the streets of Croydon, where each group was assigned two areas of central Croydon known as hotspots for rough sleepers.

During the shift, volunteers congregated near Surrey Street Market and were served much-appreciated cups of tea, coffee and hot chocolate by local business Melt Van.
London Live also attended the Tuesday night shift where they filmed volunteers on the streets and interviewed members of the steering group for CR Zero 2020. The footage was then turned into a news feature on the London Live channel later on in the week.

After the night shifts on Tuesday and Wednesday were over, Road Runners Mini Cabs provided transport for volunteers free of charge to ensure that everyone got home safely.
As well as the night shifts on Tuesday and Wednesday, there were also drop-in sessions from 10am-1pm on Wednesday and Thursday held at Alexandra House, for rough sleepers to receive refreshments, provided by Greggs, and complete surveys if they had not been able to do so the nights before. The final survey shift occurred early Thursday morning and on Friday. Data entry volunteers uploaded over 40 completed surveys onto data visualisation analysis software, provided by Tibco, in time for a public presentation on Saturday.

Coming soon: the public presentation of the findings of Connections Week

The first stage of CR Zero 2020 is now complete, however, there are still plenty of ways to get involved in ending chronic rough sleeping in Croydon. Read more about how you can help here.