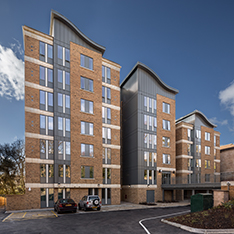 The Mayor celebrated the new high quality accommodation by saying: “I’m so pleased to take part in the opening of the Fitze Millennium Centre. This housing development will make a difference in the lives of young people and is an excellent legacy for Croydon. It also embodies the important work of the charity and former chair David Fitze.”

The Fitze Millennium Centre is named in honour of former Chair of the Board David Fitze, recognising his 18 years of service and the achievement of the vision of redeveloping our entire property portfolio.

Opened in early 2015 and built by Hill Partnership, the Fitze Millennium Centre replaces Knights Millennium Foyer (KMF). The building was funded by Big Lottery Fund and the Greater London Authority, with the project supported by Croydon Council and HSBC.

Kavinishan, who lived at KMF for 6 months before moving to the new building, is delighted with the new facilities. Kavinishan believes that having a brighter place to live with better facilities is ‘motivating and gives us a base and direction to start getting into opportunities like training, work or doing a course.’

Jeremy Gray, Chief Executive of Evolve said, ‘This new service is a fantastic example of what we can do to improve the lives of young homeless people. Within the walls of this amazing building we are creating new possibilities by providing supported housing of the very highest quality. We are thrilled with the support we’ve received in developing this project which allows us to continue to serve the local community.’